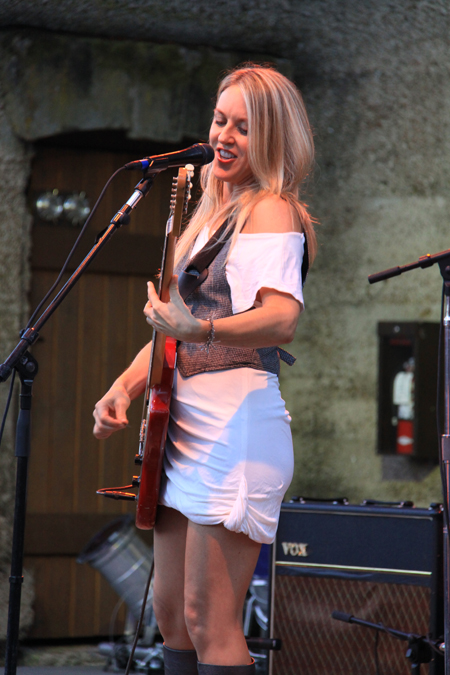 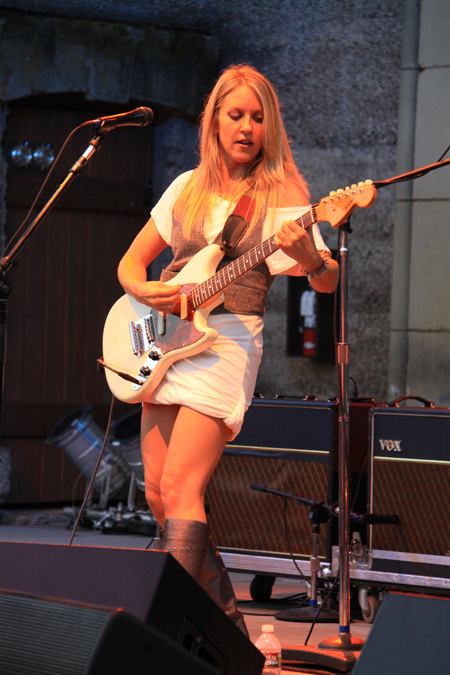 On September 20th, the seventeen-year anniversary of Liz Phair's second album Whip-Smart, I sent her an e-mail for a few recollections on the album. What I got in return was more than Whip-Smart. It was more like a current state of Liz Phair address. Without further ado, here is Liz's response:

Liz: Sorry I've been AWOL - writing songs for new release - beautiful, truthful, complex - a lot of open D tuning and unusual structure and chord progressions. Definitely want to record them spare, so that my guitar work can be heard. I haven't felt this type of songwriting since Guyville. Kind of magical. Maybe I will finally make my old fans happy. ;) I think I needed space to exorcize the demons of my major label experience and let the dust settle. I'm glad I turned down offers for management and just let the whole business go quiet. You can't really hear yourself, your inner self, until it's quiet. Those "Here's what you need to do", and "I've got a great opportunity, but we have to act immediately" calls interrupt the flow. Obviously, you have to earn money, but the whole cycle of go go go which business people need to live in isn't what brings the best out in me musically.

Whip-Smart. Hmmmm. I think I had just moved in with Jim [Staskauskas] (ex-husband) and his son Aidan. I was (as usual) running from the label pressures of Atlantic (Matador had just signed with them) and as I recall, getting threatening letters from the legal department at Atlantic demanding I tour or risk defaulting on my contract. I felt so oppressed in the midst of arguably the most successful period of my career. I had an undeposited six figure check from my publishing deal lying on the desk in our study which Aidan's pet-store-rescue rat reached from his cage and ate. That was an interesting call to make to my accountant. But I just didn't want to deal with anything. My life had gone from immaturity and anonymity to having to be responsible and available and presentable and media worthy. Those were sketchy times for me emotionally. I was in love but very haunted by the attention Guyville had received. I was always nervous and hiding in plain sight, so to speak.

Much happier memories accompany the making of Whip-Smart. When I moved the recording session down to Compass Point in the Bahamas, that was a really fun experience. Brad [Wood] and Casey [Rice] and I were left alone to make our music. We would work in the mid-morning, siesta in the afternoon and then come back to record all night. It wasn't plush, just warm, sunny, and quiet. We got along great down there. Seems like all of us had been feeling the pressure of people suddenly interested in us for all the wrong reasons back home. The studio television had live-feed cable (or dish?) and I remember loooooooooving watching all the newscasters and sports broadcasters chat, fidget and have their make up done in between takes. I've always loved revealing the process as well as the product and I just loved that.

The songs on Whip-Smart (I have no idea how I titled that, lol) were very quirky and cool, I think. Nobody in the press liked it as much as Guyville (sequel syndrome) at the time, but it has aged very well. I hear so much evocative story-telling in the lyrics that capture precious snapshots of an era and it's very rewarding for me to go back to. The videos I made in that period are some of the things I'm most proud of in my career. Jim and I worked on them together and we included the neighborhood gang of artists and musicians that we hung around with in the casts. Whip-Smart was the last record for me that felt totally untouched by outside considerations. It exemplified the manner of working which I want to get back to now: everything was personal. We didn't have to care about anything but the art (we had so much success with Guyville, everybody let us do what we wanted). It's the last time the packaging was all my art, the last time the videos were my direction, the last time, really, my guitar was the backbone musically of what we were doing.

Whip-Smart was a period of high highs (sometimes literally) and low lows for me personally, but at it's heart, it's just a really simple, personal rock record and I love it for that. The last of my innocence, I guess. ;)

As for upcoming: there's a documentary debuting in London in November in which I'm one of the featured called Dreamland, about one day in the life of 12 notable Californians. Not sure when it will premiere here, but probably around then. I also shot what amounts to a goodnatured porno with the band Girl Problems - a video to accompany their song "Sancho" in which I play Nick Weber's wife whom he thinks is cheating on him with everything but the kitchen sink (although that's an accessory in one Liz-on-top scene). Should be released soon - check their site. And most importantly, wrote and performed a song with A. R. Rahman for the end credits of a beautiful, stunning, amazing film written and directed by the ridiculously talented screenwriter Alex Kurtzman (Star Trek - J.J. Abrams) starring Chris Pine, Olivia Wilde, Elizabeth Banks, and Michelle Pfieffer. When I say the film is good, that isn't the half of it. It's coming out on Dreamworks, and I think the title is being decided. [The film in question is Welcome To People.] I am hugely proud to have worked with Alex and A. R., so much so, I could hardly believe it was really happening while I was there. I lent my voice in small ways to the score as well. Alex reached out to me a while ago, saying my music had helped him while he was writing Elizabeth's character and the love was instant and mutual. I am so lucky to have been any small part of this amazing film and I can't wait to watch everyone be blown away when it comes out. They mixed at Skywalker Ranch - a place I'm dying to go! We had star-crossed schedules, but Alex sent me a Darth Vader toaster. :):):) Coolest.

Alrighty then, as Trey from SATC [Sex And The City] would say...

Hope everybody has good memories of their own experience with the Little Engine That Could: Whip-Smart. Happy anniversary! Xoxoxox Liz

P.S. Did you watch the Charlie Sheen Roast? I thought it was hilarious but wow! That unknown chick was harsh. [She is comedian / actress Amy Schumer.] Do you think those with the least clout get pressured by the writers to carry the most evil stingers, cause the big names won't go there, or do you think she came up with it herself?