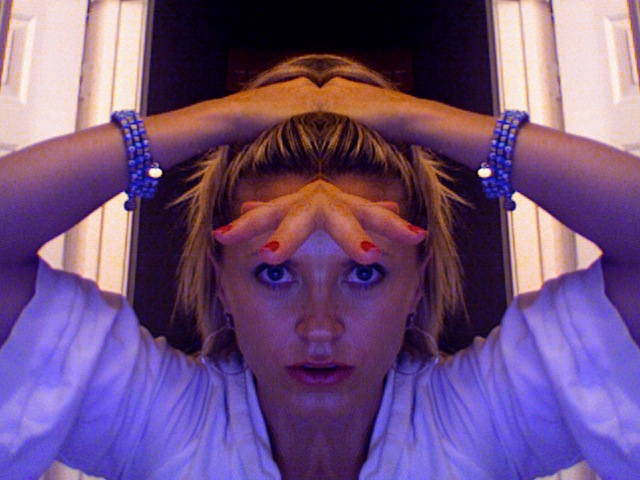 Since the "official" interview in July, Liz Phair and I have exchanged emails. With her permission, here is an informal follow-up "interview": transcripts of emails answering fans' questions.

Liz: Hi Ken! Thanks for doing that interview with me. It felt great to start with you.

Ken: You're welcome! I have a few questions that fans are asking me about. Fans are suggesting that you should blog or podcast on a semi-regular basis -- they want to know what you're up to.

Liz: I'll start podcasting once I'm on the road in October, but I fear the quality will be less because Dino [Meneghin] always took good care with those. Maybe I can find another producer that's cheap, we'll see, or it will have to be run and gun style.

Ken: Speaking of tour dates, some of the East Coast / Midwestern fans were wondering if there will be dates in their region in the near future?

Liz: Yes, I will be touring both East Coast and Mid West coming up, just haven't confirmed yet.

Ken: Were you serious about those WCSE demos you mentioned our interview? I've been showered with questions regarding them!

Liz: Yes, totally serious about the demos, it's just going to take me a minute to go through the box and see what's in there. I think it would be nice to replenish the bootleg stock since the Girlysound bonus disc will deplete it.

Ken: Will you be updating your bio on your Rocket Science information page?

Liz: Hee-larious. Just checked out the bio page for Rocket Science. No idea who culled that but obviously someone has a taste for a certain Liz Phair 'look'.

Ken: Are your songs still published by Sony/ATV?

Liz: Yes, still with Sony/ATV for now. They may not be too happy with the terms of the release (not major label).

Ken: How was the Dave Matthews Band show at the Hollywood Bowl? Someone spotted you at the show, so I had to ask.

Liz: The Bowl show was so so so great. Dave and Ashley and all the crew. One of those great nights where the whole gang comes together and the band is loving playing the music, great weather, etc.

Ken: Someone suggested that you put up multi-tracks for a song from Funstyle so fans could do their own remix. What do you think of that idea?

Liz: I think the multi-track idea is a good one, and easy to do. Did they mention which song?

Ken: The songs I heard mentioned in regards to the multi-track idea were "Smoke", "My My", and "Bang! Bang!"

Liz: I have a question for fans: what are the top 10 most popular songs live?? Trying to make a set list. If you get a chance to take a poll, please let me know!

Liz: Haven't gotten the equipment yet to listen to old tapes. Don't worry, I'll get to it. Just have a lot of balls in the air at the moment. Thanks again for helping pick the right songs!!

Ken: No problem. Take your time!

Funstyle [packaged with the bonus disc Girlysound] will be in stores October 19th.

[Many thanks to the fans for their questions.]