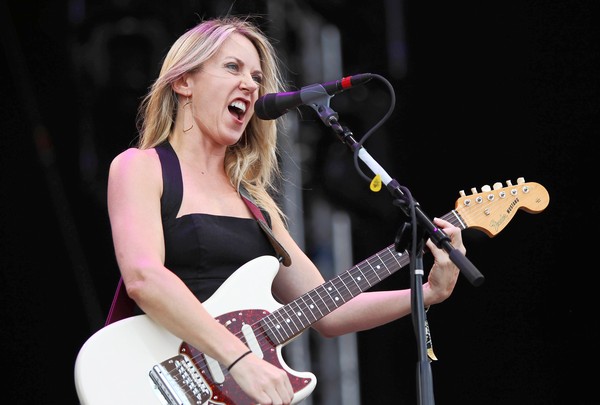 On July 6th, Liz Phair sent me an e-mail.

Liz: Of course legalize same sex marriage. Everyone deserves a chance to be stymied by that venerable institution. ;)

I know I've been AWOL - as recompense, I will email you thoughts (increasingly incoherent as the night progresses) on the 9th during the oh so longed for DMB Caravan like your Twitter. Maybe not as many as seems usual for tweets but still, real time. Love the 3D text on Mesmerizing!!!!!!! Geeeeenyus. Xoxo

In the early hours of July 10th, Liz sent me this e-mail about her Dave Matthews Band Caravan Chicago experiences.

It was awesome!!!!! My set was a little strained because I could tell the crowd was like, "who the hell is this??" but all my peeps came to watch side of stage and it was still great. I love Dave [Matthews] and I love Ashley and all the people they surround themselves with.

Saw TR3 side of stage - Tim Reynolds was channeling some Iggy, stripping down on stage in the heat and their bass player with whom I recorded the song "Carnivore" a million years ago [Mick Vaughn], had the best moves and the best attitude. Ducking and weaving. Dave was watching too, looking crisp and devastatingly handsome in a black button down before his set with Tim on another stage.

Ashley, her friend Catherine (who races cars at the Bonneville Salt Flats) and I made a trip through the grounds, tried swinging some hoola hoops, took a look at the olive fanny packs from nomadic sandals and ended up cutting in line with my friend Ari Bendursky at the Ferris wheel and flying up and away above the lake, the sky, the mainstage and the crowds. Beautiful.

It's so great that festival was held on the South Side. Loved driving down Lake Shore Drive to 41 and then South Shore. Those neighborhoods are wonderful and the North and South of Chicago don't mix enough, in my opinion. DMB is just the band to bring the scenes together.

The old steel mill was still in evidence here and there with an unearthed spring coil or metal relic. It was crazy walking around backstage over boulder sized gravel. Everybody called it "walking on the moon".

Ran into G. Love in the mess tent. Our parents do the cocktail thing together in Sannibel Florida on occasion. How random is that?

Plastic was a theme. Someone had a blow up sex doll out in the crowd and I tried to get them to give it to me while I was on stage. Shot down. I also took home a certified DMB beach ball because fans were hitting dozens of them over the backstage fence. Picture: a whole bunch of security guards standing all sharp and serious while beach balls come flying and rolling into their midst. I asked one about it and they said so many were incoming that they just got tired of batting them back over. Hilarious.

Ben Folds sounded amazing but I never got to see him. Heard him though! DMB knocked it waaay out of the park. I would say it was a pretty fresh set list, almost at times experimental and edgy with the finale crushing it with sound and light show. Everybody's solos were killer. Just one after the other. Tim Reynolds did some amazeballs slide work. Boyd and Stephan were crushing it, making me dance in weird new ways. Carter as always brought he house down with patterns inside of patterns and Dave did a solo accoustic performance of "Whiter Shade Of Pale" which brought many ladies to tears as we got our freak on in the sound booth. Majestic is a word I would use to describe a DMB show.

The moon was setting and the sky was clear. The crowd stretched literally as far as the eye could see and they were all jumping up and down, hands in the air. At the end of the encore, the house pumped the volume and the guys on stage really thundered it out, the lights switching palletes so fast it was dizzying in a great way and I was thinking how it was like sending shock waves across Lake Michigan to the "other" Lakeside (Mich.). Two 'Lakesides' bridged by massive sound and human joy. Man. Good night.

Which brings me back to the theme of plastic. There must have been two recycle bins to every one for trash and yet when the crowd cleared out, the property was blanketed in a thick layer of plastic bottles. Seriously? It was like that mid-ocean swirl, and I am asking: people! Don't leave your trash!!! It's gross. Surely we can do better than that. As we filed backstage for the after-hang in the outdoor lounge next to Dave's bus, we hung our heads in shame as the work crews had to try to sweep all that consumer carelessness up in amongst the wood chips. Not easy to do.

On happier note, by the time I left I was fortified with a months worth of good energy and my friend Caroline and I drove back up the Lake Shore to our Northern suburbs talking over each other the whole way and debating whether or not to stop at McDonalds. Youtubed the old song "two all beef patties special sauce lettuce cheese pickles onions on a sesame seed bun" the irony was thick, but what can I say, I'm American. What I really craved were just fried beignets.

When I dropped Caroline off, her husband had fallen asleep in front of the TV in the sunroom waiting up for her and since she didn't have her key, we were pounding on the window as he snored away not a foot from the double pane glass, unrousable. We were asking ourselves, is it better to call the police? Because if we do get him awake and he sees these two faces outside the window in the dark is he going to have a heart attack?? Eventually we got her inside ;).

Well, there you have it for the most part. I may never get to play mainstage DMB again (musical genre interloper that I am) but it was well worth it for the memories and the love. Hope you had a good one, Ken! Ta. Xxxx