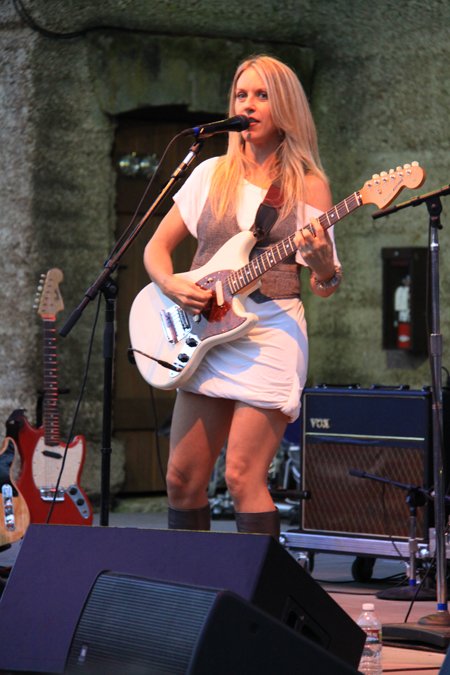 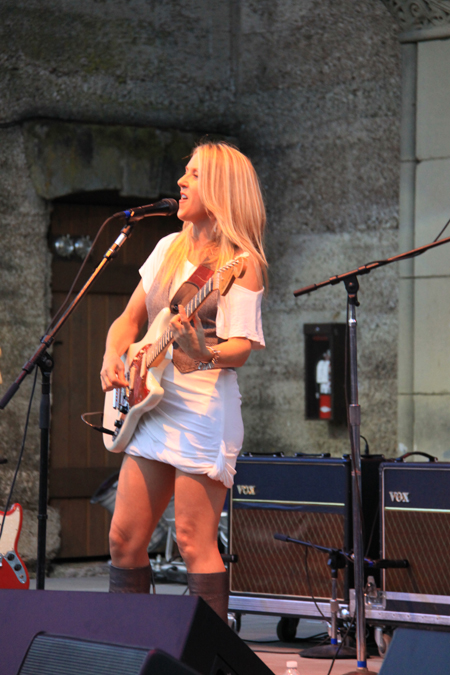 June 24th marks the ninth-year anniversary of Liz Phair's eponymous album Liz Phair. I asked her for a few recollections on the album. Without further ado, here is Liz's response:

Liz: Liz Phair is actually a document of several different recording sessions spanning a few years time. Coming off of the tour for Whitechocolatespaceegg, the band and I were all warmed up and wanted to capture what had gelled on the road onto tape. That session was tracked live. I love the fluidity of "Firewalker", and "My Bionic Eyes". You can hear how we all move together as one beast. Dynamic is always great when you have a band that's been playing together for a while. There's a lot more unreleased material from that session. (Here's a sample.)

The songs with Walt Vincent and Pete (Yorn) were created in a much less formal, more intimate way. I think of us back then as playful, like we were kids cooking stuff up in a garage in Culver City. I'll never forget the very first session with Walt and Pete when they asked me to play a couple of songs so we could choose what to start with. I did my usual mumbling run through, blushing brightly, and they immediately liked "H.W.C." When they asked me sing the lyrics clearly, Pete's face got all red, too, and he was like, "you animal!" Very funny.

Walt has an amazing knack for honing in on and making the most of a hook. "Good Love Never Dies" is a prime example of that. I would leave for the day and Walt would stay up tinkering, layering instruments and BVs and the next day, it would be like Christmas when I heard how it had all developed.

Working with Michael Penn was probably the most professional and clear sounding recordings I've ever made. We did the basic tracking in studios around town, but the bulk of the work was done up in the aerie of the Capitol building, the lesser known (but to my mind preferable) recording suite up on the top floor. Michael was a stickler for beautiful vocals. He introduced me to a little thing called a neti pot and if I were too congested, he'd postpone. He created these beautiful, abstract, mechanical sounds to thread through the work that gave it depth and landscape. "Little Digger" and "Friend of Mine" are two of the songs I am most proud of out of my whole catalog.

A few memories from that session: going up on the roof while Michael smoked, standing just beneath that iconic needle looking out over Hollywood at sunset, watching the prostitutes over on Argyle street strut their stuff; the day one of the hip hop bands brought a gun to the exeutive offices and the whole place shut down, got rewired with all kinds of stepped up security; going to Andy Slater's office late in the evening when practically no one was in the building but him and us and listening to him play guitar; Abe Laboriel jnr. demonstrating that percussion is not a solid but a liquid.

I loved hanging out with Michael. He's an incredibly smart, funny and surprising person. He'd say these outlandish things that always turned out to be true.

When I went to meet The Matrix I was shocked when I rang the bell and Lauren Christie opened the door. I had met her and Graham before -- a dinner with Ann or Scott Litt I think -- we'd all hit it off. So for me, THE MATRIX (drumroll) were really just these awesome people that I already knew.

It's a shame that fans can't see how artists create behind the scenes. I've recorded with many people in many types of situations and all music making sessions have much more in common than they have differences. It's always ALWAYS folks who love music making the kind of music that they love ;).

I learned so much from collaborating with The Matrix, watching the way they worked and it was especially appealing to be influenced by another woman. Though "Extraordinary" and "Why Can't I" seemed a stretch to my old indie fans, all the Matrix songs were incredibly effective live and could anchor a performance in any milieu. It was a pleasure and a privilege to take that stuff out on the road. It is so acrobatic vocally (I was Lauren's avatar -- she is a much better singer) and it opened doors to stage experiences I would never have had a chance to be a part of otherwise.

Ken: What were your favorites from the album?

Liz: "Little Digger" might be the most meaningful song to me for personal reasons, obviously, but I really do love that record and am very proud of the work we did on it. Liz Phair had the most impact on my career besides Guyville -- and it changed me as a performer. I sang "God Bless America" at the White Sox World Series game (see it here). I got to call up to the stage a young kid who was blind and suffering from leukemia during a 5,000 person NIKE event and give him his dream come true to play drums on "Why Can't I", when it was a top ten hit. I played main stage at Bumbershoot and won over a huge crowd who was not all that into it at first (if you think that's easy, I have some swamp land I want to sell you). I met every god-damn morning disc jockey in the northern hemisphere. But most importantly, I had a wicked cool team of support, and the best touring band and crew you could ask for. We played and skied, we played and windsurfed, we rode ponies and then played a show. Played paintball, rode dirt bikes, had parking lot weenie roasts and a thousand laughs and a few tears. Good times.

Ken: One last question: when did you make those comments about "Chickapalooza"?

Liz: Oh, I was in a round table for People Like Us at the Four Seasons. Press all day and some of the questions were about music. We were just riffing, I'm not starting a festival or anything! Media outlets need stories to seize on and that was just the angle that journalist took. Sorry if it got people going; you have to understand I was talking for 5 hours to different writers every ten minutes and some of the stuff you end up talking about is just plain ridiculous. But they need an attention grabbing element so la dee da. No harm done, I think?